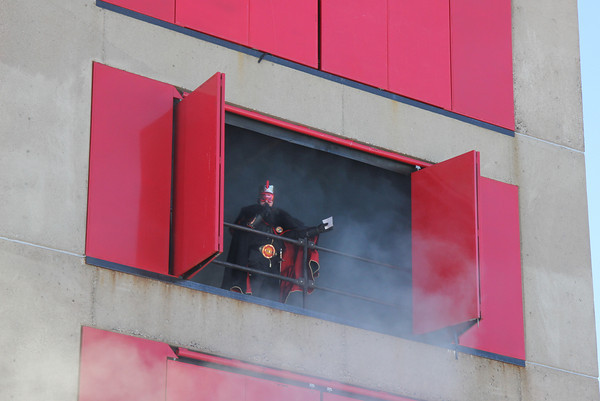 See the new Vulcanus Rex and his Krewe revealed for the first time this year!  This new Krewe will be roaming the streets of Saint Paul for the 10 days of Carnival.

Vulcanus Rex – The King of Fire. Self claimed as THE TRUE KING of the Saint Paul Winter Carnival. Vulcanus battles to end the cold of winter, and seeks to bring the warmth of summer back to the beautiful City of Saint Paul.

Baron Hot Sparkus – Commander of the Lancer’s Legion and the Stoker of Emotions. Sparky is the “SPARK PLUG” of the Vulcan Krewe.

Grand Duke Fertilious – Minister of Propaganda. The Propagator of Progeny. This Krewe member usually has the most offspring.

Count of Ashes – The Raiser of Sleeping Spirits. The “SWINGER” of the Vulcan Krewe.

Count Embrious – Fire King’s Chancellor of the Exchequer. The young and romantic one. Embrious also known as EB is usually the youngest member of the Krewe.

Duke of Klinker – Fire King’s Aide de Camp and the Herder of the Flock. Klinker is the longest burning ember, that just never wants to go out.

General Flameous – An Army Commander, the Administrator of Fire. The Keeper of the Flame. The legend of Flameous: if the Flame dies, the Fire King dies — and it will be winter forever.

Prince of Soot – The Recorder of Past Memories. The “LADIES MAN.” Sooty is usually the oldest member of the Krewe.

To learn more about the legend please visit the Vulcan organization website.