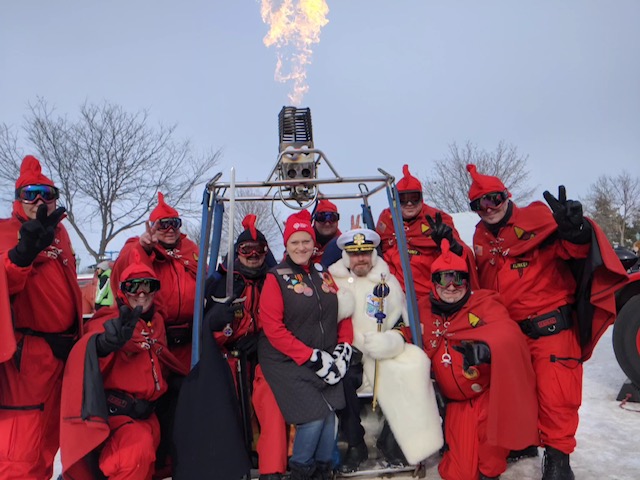 These ceremonies have been around for almost fifty years. Every year, each Krewe knights literally hundreds of lucky individuals. Special people are singled out by Vulcanus Rex and his Krewe on which to bestow this unique privilege. A knighting ceremony consists of a “title” being bestowed, and a certificate being presented. The title and the memory of this event are forever. The titles that are given to the individuals are usually thought up by the Krewe members.

The current fire engine being used by the Fire King Krewe is a 1932 Luverne. The engine was built in Luverne, Minnesota, and is believed to be the only one of its type left.

The mark started in 1940. The mark was originally imparted on ladies of the realm as a sign of their willingness to demonstrate their allegiance to the Vulcans and to forsake forever Boreas and his followers. In more recent times, the mark has been extended to male members of the population in this manner; a Krewe member will draw a “V” on the cheek or forehead of the individual.

To request the Vulcan Krewe to appear at your function: